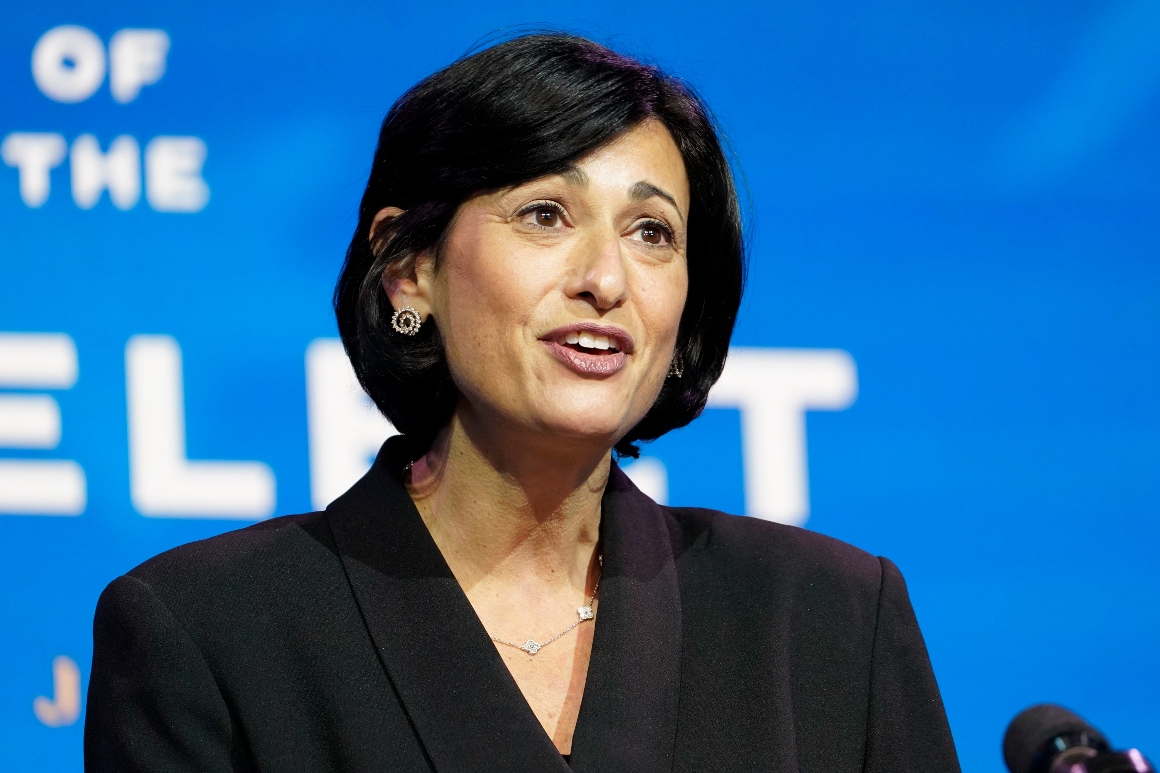 “It was very clear that [Walensky] didn’t want anyone talking to reporters at that time,” a senior CDC official told POLITICO. “She wants to control the narrative as much as possible.”

The anecdote highlights the extent to which the CDC and its director have struggled to send a clear and unified message on public health measures to fight Covid-19. Their track record so far has been mixed, including an abrupt reversal on mask rules for vaccinated adults after public outcry.

Now the agency faces its biggest test yet: loosening its public safety guidance as the pandemic recedes, while simultaneously trying to prevent infection rates from spiking in undervaccinated communities. Adding to the difficulty, the highly transmissible Delta virus variant is gaining ground across the country.

“It’s very hard to separate the criticism of the agency from what we’re seeing in the continued politicization of the response,” said Ali Khan, dean of the University of Nebraska College of Public Health. “There continues to be this thread of partisanship. Until those political issues are relieved CDC will be in the awkward position of ‘They are going too far’ — or not far enough.”

The agency has not yet responded to a request for comment.

Walensky had never worked in government before January. She joined the Biden administration after spending more than two decades treating and researching infectious diseases, most recently as chief of infectious diseases at Massachusetts General Hospital, where she earned high praise for her research and leadership skills.

The new CDC chief inherited an agency whose public profile and staff morale had taken big hits under Trump. His administration cut the CDC out of conversations for more than a year about the federal pandemic response. When Biden took office, Walensky faced the enormous task of rebuilding an agency that was once seen as the global leader in public health, and restoring public trust — all while helping to lead U.S. efforts to combat Covid-19.

Her strategy has relied in part on her ability to control what information flows out of the CDC to the press. Although Walensky participates in White House Covid-19 press briefings during the week and in major television network interviews, her top lieutenants and the agency’s rank and file scientists rarely make public appearances or give interviews to journalists. Their work is behind the scenes, completing scientific analyses and studies about Covid-19.

The lack of media access to CDC scientists pushed the Washington, D.C., chapter of the Society of Professional Journalists in February to send a letter to Walensky denouncing the CDC’s “restrictions on staff speaking to reporters without notifying authorities,” according to a press release from the organization.

To be sure, Walensky’s approach to releasing major new policies on Covid-19 is not all that different from how other federal agencies operate. But the consequences of the CDC limiting employees’ communications and public statements are greater for Walensky than for other federal leaders, particularly because the health agency is attempting to remake its image as an advocate for science and open communication. And its handling of the Covid-19 pandemic affects the lives of millions of Americans.

Getting it right requires synthesizing complex virology and public health and behavioral science findings about Covid-19 in an easy-to-understand way for the public, while ensuring that the White House is on board with the CDC’s conclusions.

During the first months of the Biden era, the CDC has scrambled to clearly communicate some of the most critical federal policies on Covid-19, and to balance the narrative that life is returning to normal for those fully vaccinated and that Covid-19 still posed an incredible risk to those who were not. Republicans on Capitol Hill, state governors and former political appointees, as well as school and teaching associations, have criticized the agency’s confusing recommendations on basic activities such as mask wearing and reopening schools and summer camps.

The agency’s changing recommendations for vaccinated people have been among the most controversial. Its first guidelines on the matter, issued in early March, urged continued caution because “how long vaccine protection lasts and how much vaccines protect against emerging SARS-CoV-2 variants” was “still under investigation.” In early April, days after Walensky said she felt a “sense of impending doom” about the pandemic, CDC said fully vaccinated people could resume domestic and overseas travel as long as they wore masks in public.

Three weeks later, the agency released a major update: Vaccinated people no longer needed to wear masks indoors or outdoors when in small groups with other fully vaccinated friends and family — and in some circumstances could go maskless with unvaccinated people. The agency did not revise its earlier statement that the duration of vaccine protection and the shots’ efficacy against variants were still under investigation, leaving many members of the public confused about the reasoning behind the new guidelines.

“Explaining the why is just as important as explaining the what,” said Leana Wen, a professor of public health at George Washington University. “It would really help if the CDC explains that when decisions are made … so it is not just, ‘Here is the study.’”

Within the administration, the CDC has ruffled feathers for the way it has handled the rollout of the guidelines for vaccinated Americans. In March, after a series of meetings and calls with senior officials on the White House’s Covid-19 task force and the Department of Health and Human Services, the CDC was told to “hold off” on releasing its initial advice on the topic. But by that time a version of the guidelines had already circulated among top health officials — who thought the language was final — and members of the media.

Still, Walensky’s colleagues at the CDC say they are still confident and hopeful that she is leading the agency into a new, more positive era. Over the last several weeks, Walensky has moved to streamline the agency’s Covid-19 response, shifting more responsibilities to Henry Walke, the director of the agency’s Division of Preparedness and Emerging Infections.

Walensky has also tried to increase the CDC’s engagement with outside groups and politicians in an effort to ensure the agency’s Covid-19 recommendations can be implemented on the local level. And she’s prioritized efforts to increase the collection and accuracy of racial and ethnic Covid-19 data so the CDC can better track how the virus impacts different groups.

“So many of the changes that [Walensky] is making are long overdue,” said a senior CDC official, who asked for anonymity to speak freely about the agency’s decision making. “And she’s just getting started. I think you’re going to see a wholesale remodeling of the way we do things, especially as Covid-19 begins to die down.”

Biden’s chief medical adviser, Anthony Fauci, who has helped to guide the federal response to major disease outbreaks since the 1980s, said that balancing the science on risks for individual vaccinated people and for the population at large is difficult.

“Things get complicated with situations that go beyond individual risk assessments. You are going to get situations where enterprises … that could be an airplane, or a department store … will say if you want to come into this place you have to wear a mask. But that will be interpreted by people as saying ‘I will be stigmatized,’” he said. “It makes the policy quite complicated.”

The long-standing federal scientist advocated for Walensky’s appointment as CDC director, and officials close to both Fauci and Walensky say he has advised her on the ins and outs of high-level Covid-19 communication.

Another senior health official working on Covid-19 said the CDC and the White House often engage in conversations about how and when to get the country back to normal and that “the timelines don’t always match.”

The CDC’s top scientists hesitated before releasing the May guidelines that said fully vaccinated people could safely remove their masks in group settings that included unvaccinated people, according to two senior health officials with direct knowledge of those deliberations. The fear, those officials said, was that the infection rate among the unvaccinated would continue to increase and that more dangerous virus variants would send parts of the country into another surge. At the same time, Biden was touting plans to return the country to relatively normal conditions by July 4.

“I don’t fault the CDC for being conservative,” Khan said. “People keep losing the fact that there are 600,000 dead people that don’t need to be dead, and they have not stopped dying yet. We still have 400 deaths a day. Each and every one of these are preventable deaths.”

Agency officials and other leading health experts are worried about moving too quickly toward fully relaxing Covid-19 public-health measures given the spread of the Delta virus variant, which now accounts for 10 percent of new cases in the U.S. Data from the U.K. suggests that the variant is 60 percent more transmissible than the Alpha variant, which in turn is significantly more transmissible than earlier versions of the virus. The Delta variant is also less susceptible to vaccines; real-world data suggests that some vaccines now in use only provide significant protection against the variant after the second dose.

One of the CDC’s main goals now is to convince large swaths of the country to get vaccinated against Covid-19. Biden has set a goal of vaccinating 70 percent of U.S. adults by Independence Day, but with demand for shots slowing to a trickle it is not clear the country will meet that target.

States across the country have offered financial and other kinds of rewards for people to get the vaccine, but the number of people who have signed up in recent days has edged up only slightly. Administration officials believe that as the country inches toward July 4 and Biden’s goal of returning to normalcy, it becomes less and less likely that those who are not vaccinated will get the shot. Most states have ended mask mandates and social distancing rules, including occupancy restrictions on restaurants, bars and other businesses.

The problem, one senior Biden official told POLITICO, is that as the country moves further in the direction of getting back to normal, the CDC will be forced to issue guidelines that help facilitate that trend. It will be more difficult to reimpose guidelines that focus heavily on public health measures like mask wearing, even if undervaccinated parts of the country experience variant-driven surges in infection this fall when schools and businesses reopen.

“I think when you’re trying to balance everything that allows people to do these group activities without having big flare up in infection … camps and schools really create a challenge,” said Marcus Plescia, the chief medical officer for the Association of State and Territorial Health Officials. “States don’t always listen to CDC guidance. They take what is helpful for them and kind of adapt it.”