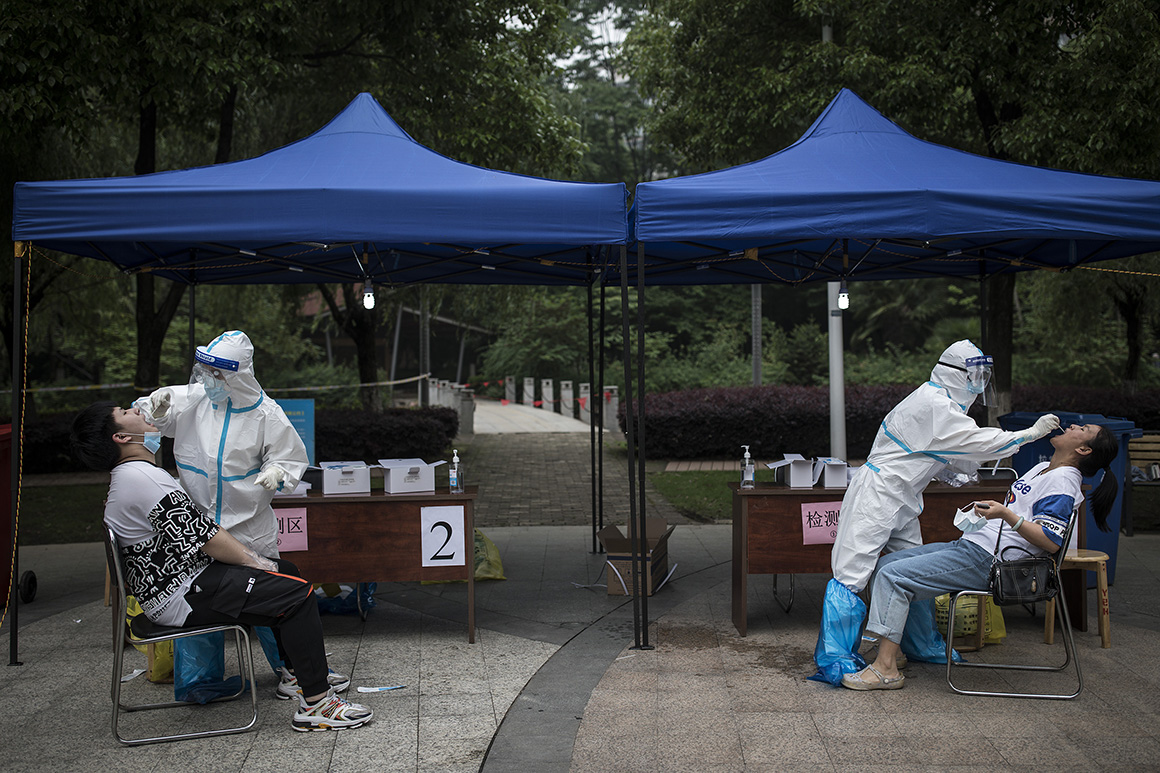 “As we analyze what went wrong and what we can do in the future, we have to have answers to these questions, too,” said Sen. Tim Kaine (D-Va.), a member of the Senate’s health committee. “And I think you’re going to see Congress addressing some of these matters as well. We’ve got to get to the bottom of it.”

The talks, which center on the Senate’s intelligence and health committees, are likely to ramp up pressure on the White House to address building frustration with its broader China strategy. Hawks in Congress, as well as former Trump administration officials, say the administration is moving too slowly in rolling out a clear policy for dealing with China. For the first time, Democrats are open to entertaining their argument that the Biden administration needs to exert diplomatic pressure on Beijing to release data from the Wuhan lab.

Senior Biden administration officials have repeatedly said that any investigation into the origins of the virus should be spearheaded by an independent, international group such as the World Health Organization. Health and Human Services Secretary Xavier Becerra was the latest to press that argument in remarks Tuesday before a WHO ministerial meeting.

But the WHO’s first stab at an investigation — which resulted in a report in March that said the lab leak theory was “extremely unlikely” — was stymied because China would not share key lab records and data.

“It’s the Chinese Communist Party that has not been transparent and allowed a deeper understanding,” said Sen. Marco Rubio (R-Fla.), the vice chair of the Senate Intelligence Committee. “They interfered with the World Health Organization’s investigation. They haven’t been transparent from the very beginning.”

Those pushing for the Biden administration to sign onto a U.S. investigation point to the Wall Street Journal article — and a recent letter from 18 prominent scientists pushing for a more thorough inquiry — as evidence that the WHO probe did not give enough consideration to the lab leak theory. But there are limits to what Congress can do, especially when it comes to a foreign country’s internal affairs. Lawmakers are unlikely to get any new intelligence or evidence from China, but they can seek documents and intelligence reports from the executive branch.

In January, the Trump administration issued a fact sheet saying that several researchers inside the Wuhan institute became sick with symptoms similar to Covid-19 in November 2019, that the lab was conducting research on a bat coronavirus that is the closest known relative of SARS-CoV-2, and that the institute collaborated with the Chinese military.

“We were running down the clock to the end of the administration, and in the final days Washington’s focus was on the events of Jan. 6. So we were limited in time and political attention,” said David Feith, former deputy assistant secretary of state for East Asian and Pacific Affairs under former President Donald Trump, referring to the administration’s efforts to make public information it had gathered about the Wuhan lab. “Now, the Biden folks have had several months to think this through, and I do hope that they decide to release more information, work with allies and press Beijing with greater energy. I’m concerned that they aren’t really doing enough.”

So far, senior Biden national security officials have not announced any formal probe, in part because an investigation would hinge on lab records that the Chinese government is unlikely to release, three individuals familiar with those conversations said. U.S. intelligence agencies could be collecting information on the matter, but it’s unlikely the administration would disclose details of such efforts publicly while the work was ongoing.

Administration officials think the investigation would have a better chance of succeeding if it was run by an outside organization such as WHO, which would allow countries to collectively pressure Beijing to cooperate, those sources said.

“We are and we have repeatedly called for the [World Health Organization] to support an expert-driven evaluation of the pandemic’s origins that is free from interference and politicization,” White House press secretary Jen Psaki said Tuesday.

People who want the administration to take on the investigation itself say the U.S. has more resources and diplomatic might than WHO — which cannot sanction its members — and that the government should tap on its intelligence apparatus to study the matter further.

“The Biden administration has been very forthright in saying that both theories are in play. But it’s very hard to investigate and it gets harder over time,” said Andy Weber, a former assistant secretary of defense for biodefense under President Barack Obama and fellow at the Council on Strategic Risks. “The intelligence community has never really considered this kind of collection a priority. The big question is does the government of China know the answer to this question? Do they have the blood samples from those lab researchers? They could do their own analysis. Have they done that?”

Kaine said the Senate HELP Committee, which has jurisdiction over public health matters, is “interested in looking at [the] big picture of what went wrong and how we can prepare for the next” pandemic. “Understanding the origin and whether there was any nefarious activity in China is all part of that,” Kaine added.

The panel’s chair, Sen. Patty Murray (D-Wash.), declined to comment specifically on the lab leak theory but said “we’re exploring what we’re going to do.” The Senate Intelligence Committee is already examining the scenario.

“The health committee is interested in knowing the origin of Covid-19. That’s not triggered by a press report. Nobody knows the validity of the press report,” Sen. Richard Burr (R-N.C.), the top Republican on the health panel and a senior member of the Intelligence Committee, said in a brief interview.

“But I think it’s absolutely essential that we understand what we can about the origin — and the opinions on that are split about 50-50 right now,” Burr added. He noted that the Intelligence Committee would focus on the “cause,” while the the HELP Committee would examine a potential “solution.”

Republicans have long pushed the lab leak theory, often drawing scorn from Democrats. But GOP lawmakers say their concerns have been validated in light of the Wall Street Journal story. House Minority Whip Steve Scalise (R-La.), the top Republican on the House’s select committee on Covid-19, earlier this week called on the panel’s chair, Majority Whip Jim Clyburn (D-S.C.), to open an investigation into the pandemic’s origins.

A spokesperson for the committee declined to comment on Scalise’s request, but noted that the House Science Committee intends to pursue a similar probe. Republicans on the House Energy and Commerce Committee are also investigating the matter.

If the U.S. were to conclude that the virus originated in a lab and that the Chinese government was concealing it from the rest of the world, there would be “devastating consequences” for the U.S.-China relationship, Sen. Chris Murphy (D-Conn.) said in an interview.

But the U.S. might never know for sure — or ever be able to find out. Some senators are skeptical about whether a congressional investigation could crack the code; and Democrats in particular viewed Republicans’ obsession with the lab leak theory as a way to distract from Trump’s handling of the pandemic.

“Sometimes we think we’ve solved a problem by empaneling an inquiry. You may never have the information necessary to know the source of this virus,” Murphy said. “And while that question is really important, there are other really important questions about why the United States didn’t stand up an adequate response that we need to deal with as well.”

Apart from an investigation, Congress is already flexing its purse strings on the matter. Earlier this week, the Senate unanimously adopted a measure from Sen. Joni Ernst (R-Iowa) that would prohibit U.S. funding of the Wuhan Institute of Virology.