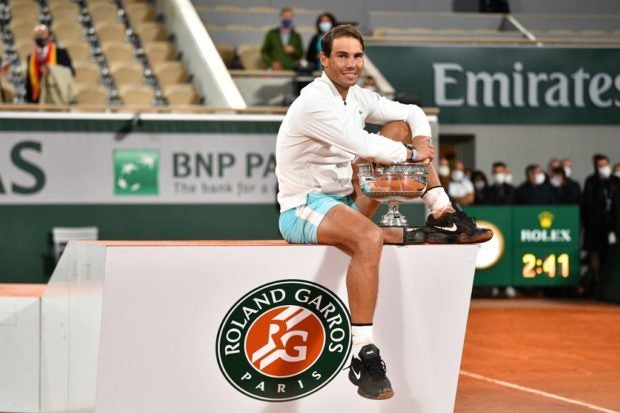 Spain’s Rafael Nadal poses with the Mousquetaires Cup (The Musketeers) during the podium ceremony after winning the men’s singles final tennis match against Serbia’s Novak Djokovic at the Philippe Chatrier court, on Day 15 of The Roland Garros 2020 French Open tennis tournament in Paris on October 11, 2020. (AFP)

PARIS, France  – A maximum of 1,000 fans will be allowed on court at Roland Garros this year with capacity capped at 35%, French sports minster Jean-Michel Blanquer said Sunday.

The number, however, should rise to a ceiling of 5,000 spectators on the three main courts and a 65% limit from June 9 which will cover the final five days of the tournament.

This year’s Roland Garros has already been pushed back by one week and will run from May 30 to June 13 with organisers hoping the Covid-19 situation in France will have improved enough to maximise the number of fans.

As part of the progressive relaxation of restrictions, the “limit will be 35% of the capacity of the courts with a maximum of 1,000 people per court,” said Blanquer.

Last year’s Roland Garros was delayed by four months due to the pandemic.

A maximum of 1,000 spectators were allowed on site each day.